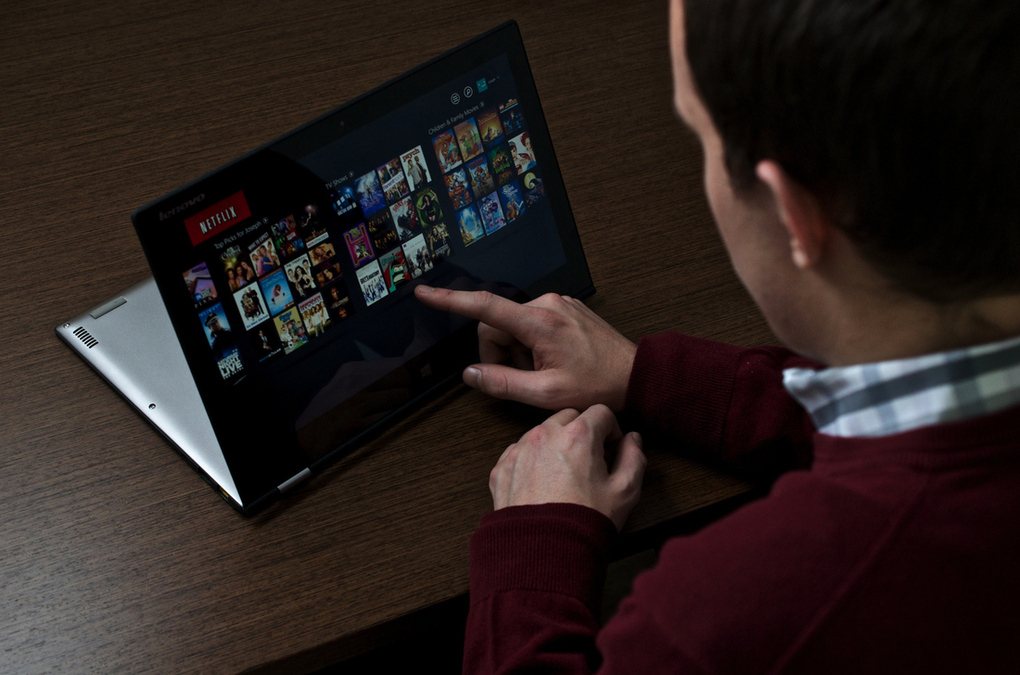 It’s Sunday, it’s January, and it’s freezing outside. In other words, it’s the perfect day to spend the morning lying in bed, finally catching up on theFriday Night Lights and Battlestar Galactica seasons I somehow missed a few years ago. Normally this is a job for my iPad mini with Retina display, but ever since I lost its Smart Cover watching shows in bed requires a perfect and precarious leaning of tablet against pillow stack. Plus I have another device here with me, one even better-suited to the task.

It’s the Lenovo Yoga 2 Pro, the follow-up to one of the first great Windows 8 ultrabooks. This is a laptop with a twist, a flexible hinge that lets the screen rotate a full 360 degrees. It’s supposedly equal parts laptop and tablet — and this year’s model comes with a massively improved display that ought to make it better in either case. The Yoga 2 Pro is never going to replace the iPad mini for subway rides and mobile gaming, but if it can be both a solid ultrabook and a great in-bed TV, it’ll solidly be worth its $1,049.99 price tag.

As long as it has good battery life, anyway. My charger’s all the way out in the living room, and I’m not getting out of bed anytime soon. Battlestar is a long show. 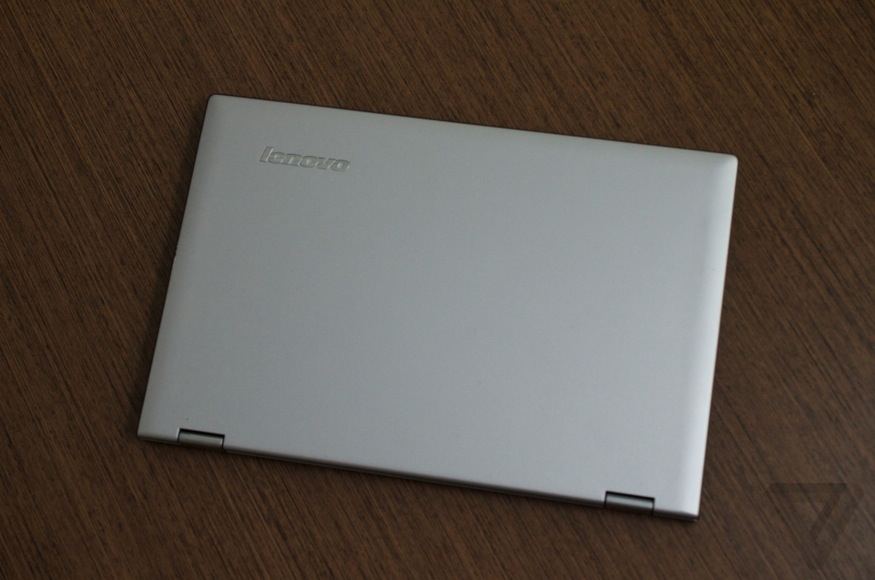 For the most part, the Yoga 2 Pro feels like any other laptop. The Yoga 13 was actually one of the more restrained, inside-the-box visions for what a Windows 8 device might look like, how it might marry touch with mouse and keyboard. This year’s model is just a hair over 3 pounds, and 0.61 inches thick — imperceptibly both thinner and heavier than the same-size MacBook Air — with a soft, matte gray shell and a textured black palm rest. It’s softly tapered on the sides, with rounded edges that feel comfortable against my wrist. The Yoga isn’t particularly exciting, nor does it feel very high-end, but it’s nice to look at and it’s plenty rugged.

This would be just a normal, thin ultrabook, except when you open the screen nothing stops you from continuing to push. You can open the lid to any angle, including by flipping it all the way around to the underside of the base, so when you hold it the keyboard and screen both face outward. It feels weird the first time, as if you’re about to snap the thing in two, but that hinge is really the story of the Yoga. 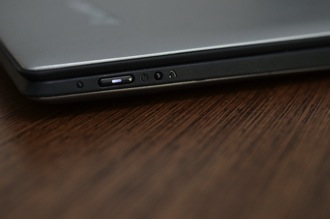 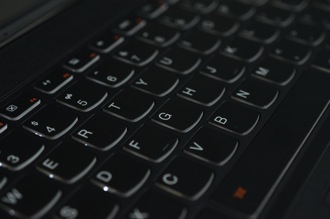 There are four “modes” in which the Yoga 2 Pro is meant to be used. First and most self-explanatory is “Laptop Mode,” which is how I used the Yoga probably 80 percent of the time and is fundamentally what this device is. It’s a laptop, and a pretty good one at that. The base model has a 1.7GHz Core i3, but it can go as high as a 1.8GHz Core i7; it also has 4GB or 8GB of RAM, and between 128GB and 512GB of solid-state storage. My review unit has a 1.6GHz Core i5, 4GB of RAM, and 128GB of storage — I’d rather have more RAM and less processing power, personally, but that mix worked pretty well for me.

It’s an utterly standard set of laptop specs, and the Yoga 2 Pro performs in kind. It’s fast and responsive, Windows 8.1 apps open and swith without so much as a hiccup, but the machine bends under the pressure of anything more strenuous than watching video. Photoshop runs, but not especially well, and anything resembling a high-end game is basically unplayable.

It lasted 6 hours, 18 minutes on the Verge Battery Test, a once-solid score that has been rendered decidedly average by the impressive efficiency of Intel’s Haswell processors. The MacBook Air lasts nearly twice as long, and even Acer’s ultra-thin Aspire S7 lasts longer — the Yoga could at least get me through the evening when I left my charger at work, but I want more from high-end Haswell machines. 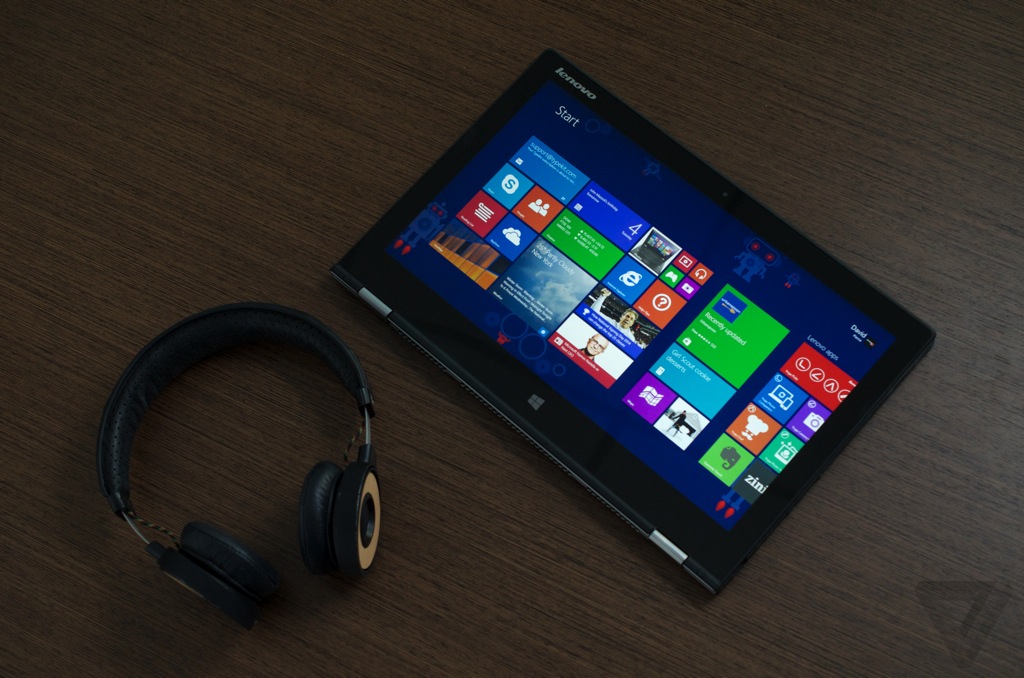 Lenovo’s keyboard continues to be one of my favorites, with those well-spaced, backlit, slightly curved “smile” keys that feel a little shallow but work remarkably well and take almost no getting used to. The trackpad’s still a bit of a problem, as it was on last year’s IdeaPad Yoga 13 — it’s mostly smooth and responsive, but it has real problems recognizing gestures and a strange habit of making the cursor disappear. A little manic back-and-forthing always brought it back, but the trackpad isn’t exactly the picture of reliability or usability.

STAND MODE IS A SHOCKINGLY USEFUL WAY TO USE A LAPTOP 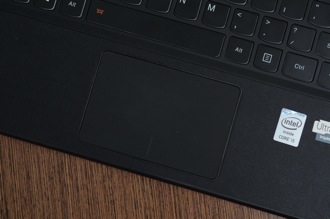 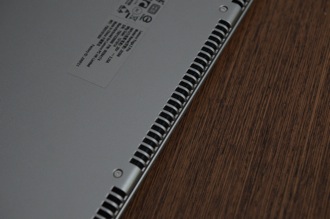 More than anything, the still-finicky trackpad is why I found myself often rotating the Yoga 2 Pro’s screen past its laptop angle, and then flipping the device over so its base became a stand, and the screen sat right up next to my face. This is “Stand Mode” — it’s how I used the device when it was on my coffee table as I watched TV, on my kitchen counter as I did dishes, and next to me in bed as I wiled away the weekend watching Netflix.

At this point it’s essentially a big, heavy tablet in a dock, usable with an external mouse and keyboard but designed to be touched. And designed to be looked at, with a gorgeous 13.3-inch, 3200 x 1800 display. It’s a lot like the screen on the Samsung Ativ Book Plus 9, which is to say it’s beautiful: sharp and vibrant, with great viewing angles and colors and enough pixel density to make any text crisp and all movies beautiful. Along with its surprisingly loud and full set of speakers, the Yoga 2 Pro’s screen — and the device’s ability to put that screen much closer to your face – make it a wonderful machine for watching just about anything.

Lenovo benefits from Windows software makers finally catching up to the high-resolution display revolution, too. Apps like Chrome used to be impossibly small on a screen like this, just a tiny sliver of content with oceans of white space all around. Now that Chrome and other apps are starting to account for these high resolutions — on devices including the Acer Aspire S7 and the Sony Vaio Tap 11 — there’s absolutely no reason not to get one. Especially on a device like the Yoga, where everything it does is designed to put the screen closer to your face. 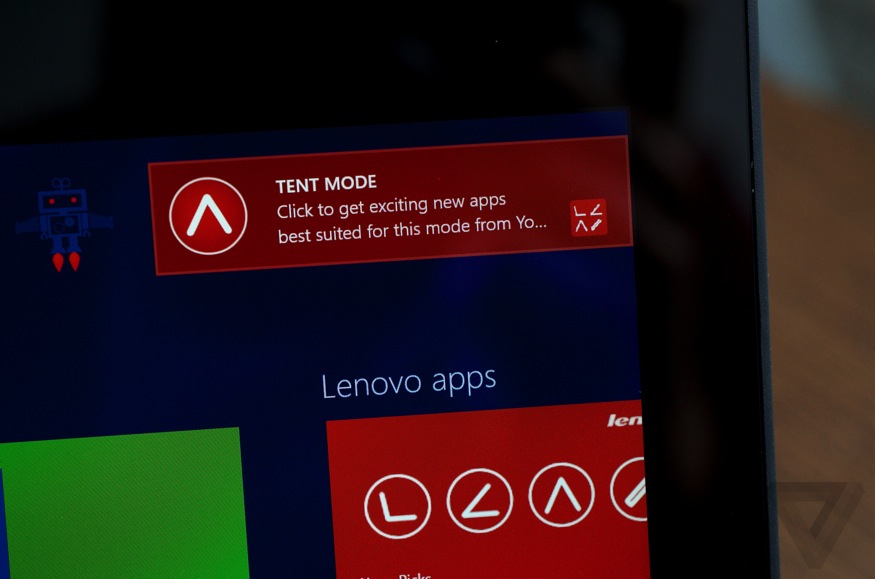 The Yoga’s hinge does have a slight wobble to it, giving beneath my finger as I tap on the screen — that’s apparently why “Tent” mode exists, urging you to prop the laptop up like a teepee and use it that way to keep the screen steady. I have no idea why that’s useful enough to merit the awkward and precarious propping up of my laptop, and I never once used it; I’d rather just have a sturdier hinge.

IT’S NOT A TABLET, BUT IT CAN ACT JUST ENOUGH LIKE ONE TO WORK SOMETIMES

The fourth mode is “Tablet” mode, in which you flip the Yoga 2 Pro’s screen a full 360 degrees and press it back up against the bottom of the device. You’re left with a big, thick, heavy tablet that I used in one and only one situation: sitting on the train, knees propped up against the seat in front of me, tablet laid on my legs. This is not a tablet in any traditional sense: it’s not portable, it’s not easy to hold in one hand or even two, and there’s nothing quite so awkward as holding the device and having the keyboard underneath your fingertips. (The keyboard automatically shuts off in this mode, but it feels really odd.) The Yoga 2 Pro doesn’t really occupy a space between phone and laptop; it’s a laptop. It’s just a little easier to use on the train.

The accelerometer inside the Yoga 2 Pro knows where you’ve set the screen, and pops up a Windows Toast notification suggesting apps that are optimized for certain modes — drawing apps in Stand Mode, Evernote in Laptop Mode, and the like. There are also a few apps installed, standards like eBay and Netflix, along with a couple of Lenovo utilities for sharing stuff between devices. This is mostly overkill: the touchscreen and on-screen keyboard are a good enough approximation of the mouse and keyboard to make the same apps work fine, and moving the screen a foot closer or further away doesn’t fundamentally change how I used the device anyway. That’s really the point: the Yoga 2 Pro is full of nice optimizations, a few things made slightly better with a spin of the hinge, but it’s a laptop through and through. 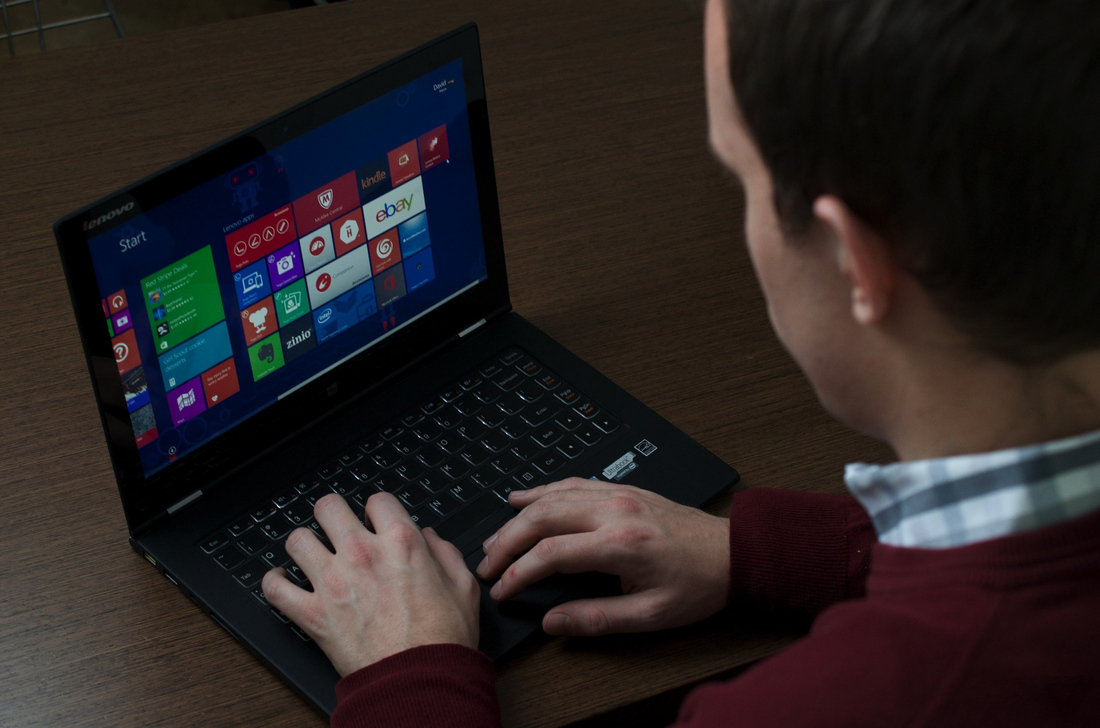 It was true of the IdeaPad Yoga 13, and it’s true of the $1,049 Yoga 2 Pro: it’s mostly successful because it doesn’t try to do too much. Lenovo realized a year ago that though people might want a versatile device that works as well for watching movies in bed as it does for getting work done, the reality is most people spend most of their time getting work done. The Yoga 2 Pro is smartly optimized for its primary task, and then subtly tweaked to work better in other situations too.

There’s really no reason not to recommend the Yoga 2 Pro, as long as you’re okay with a purely functional design. It has solid performance, a good keyboard, a great screen, and a functional-at-worst trackpad. It’s also thin and light enough to go everywhere with me, and versatile enough to be usable everywhere from train seats to coffee shops. It’s a good laptop, and an excellent companion on a cold winter’s morning when there’s a lot of TV to watch and no earthly reason to get out of bed.

Maybe that’s not the four modes Lenovo promises, but they’re the only two I really need.