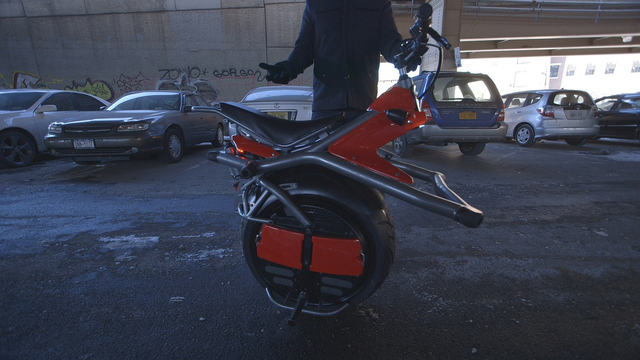 The genesis of the Ryno one-wheeled electric motorcycle can be traced back to a moment when Chris Hoffman’s daughter asked if he could build something like what she saw in an episode of Dragon Ball. A few years later, the Ryno is now a reality, and since it’s street legal, we took one for a spin on the streets of Brooklyn.

The Ryno uses gyroscopes and accelerometers to balance and drive. I’ve tried to learn how to ride a motorcycle before, and I found the Ryno easier and more intuitive. You sit down, lean into it, and you’re off. Getting comfortable takes a little while, and tight turning was too advanced for my 20-minute lesson, but I was still able to have fun zipping back and forth on my motorized unicycle.

You can ride the Ryno sitting down, but it’s easier if you hop up and stand on the foot pegs. Avoiding obstacles by drifting left and right was accomplished by simply looking where you wanted to go, aligning your shoulders in that direction, and letting the Ryno do the rest. There is a hand brake to help you stop but I never had to use it. Leaning back slowed me down and I could simply put my feet on the ground when I was ready for a full stop.

The Ryno is a beautiful machine, with the slick lines and vigorously mechanical look of a sports car or high-performance motorcycle. While it is street legal, the Ryno’s top speed is capped at 10 miles an hour and it only has a range of 10 miles on a full battery. Hoffman says the bike could easily go much faster, but 10 miles an hour was the best balance of speed and safety. Still, it could work for some urban commuters.

Unfortunately, the Ryno itself weighs about 160 pounds, meaning you won’t want to cart it up and down any stairs. And with a price tag of over five grand, it’s significantly more expensive than the comparable electric vehicles with equal or better range and speed that we saw at this year’s CES.

But that’s not really the point. The Ryno seems like the kind of thing you would splurge on if style was your thing. It’s definitely alluring. While we were testing it, a half-dozen people stopped by to gawk, take pictures, and ask about the bike. The company says it has more preorders than it can handle.

Riding it is a unique and enjoyable experience, one I’m sure would get better with a little more time spent learning how to operate it. It’s not the most practical or economical electric vehicle I’ve been on recently, but it’s not trying to be. The Ryno is more about taking a crazy dream and making it come to life.