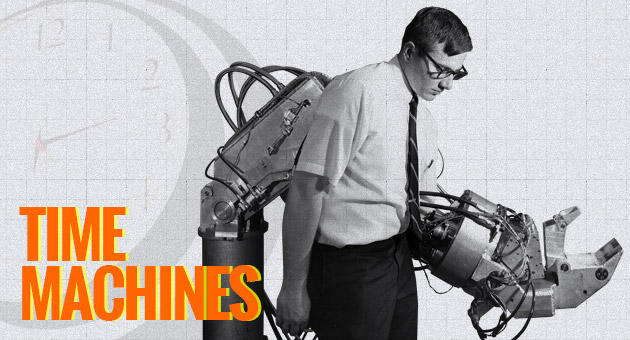 America was in the middle of a post-war economic boom during the ’50s and industries were in a rush to build the future, often with outlandish results. RCA-Whirlpool was busy whipping up the “miracle kitchen,” chock-full of mod-cons to make the Jetsons jealous, and Simplicity Mfg. Co.’s air-conditioned, bubble-domed lawnmowers arrived to ease the painful process of landscaping. General Electric (GE), a longtime hotbed of innovation and research, had various projects underway, including engineer Ralph Mosher’s Cybernetic Anthropomorphic Machine Systems (CAMS). Mosher was building man-amplifying tools that would allow users to control robotic appendages with natural human movement. Not to be left out, the US Army was plotting the future of rough- and remote-terrain vehicles, and it had its eye on GE and Mosher’s work. 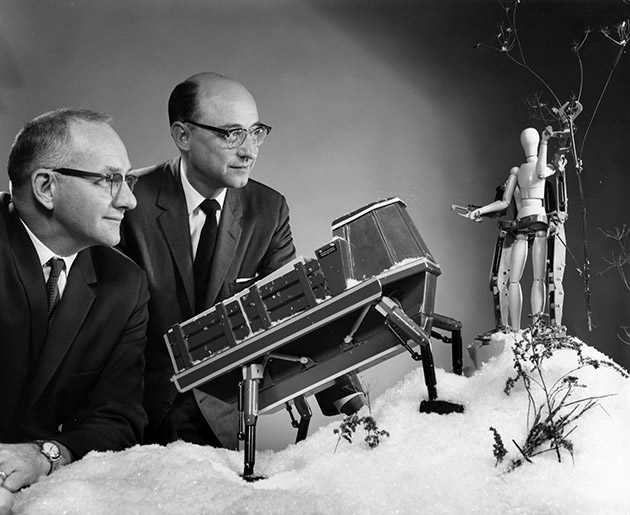 The CAMS project was dedicated to fine-tuning human-control systems, since autonomous robots were still a bit half-baked and would require more computing power than was available. Mosher built the controls so that machines could echo human movements with increased precision, while also augmenting the strength of its human user. In 1956, Mosher’s “Yes Man” project was highlighted in Lifemagazine, which touted it as a “chivalrous robot,” capable of such a delicate touch that it could assist a young lady with her coat and even take a selfie after picking up a camera (and not crushing it, essentially). An operator was able to control the robotic appendages because of Mosher’s “force feedback,” which helped mediate the level of pressure applied through its electromechanical claws. (Imagine a robot ripping off a doorknob as it attempts to simply open a door.) By sending back a portion of the sensory feedback from a remote manipulator to the operator, it helped the user gauge the appropriate level of pressure that should be applied. 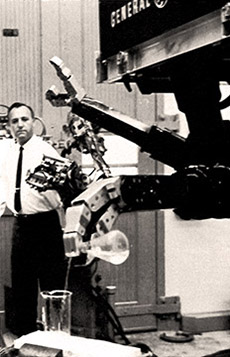 In 1958, Mosher’s work had seen some iterative development and was now called “Handyman.” This time it was developed as a method for handling radioactive equipment, with an operator strapped into a harness that controlled a set of Doctor Octopus-like robotic arms from a safe distance. While there were definite military angles to the development, GE was also still building tools for the consumer market, and the benefits of applying this research to intuitively controlled industrial machines was apparent. By 1961, the Army decided to team up with GE in order to further the research on a “walking” vehicle concept, planning to incorporate Mosher’s CAM control as a way to drive its four “legs.” As the years went on, others agencies would get involved with GE and Mosher’s unique man-machine control interface, including ARPA (Advanced Research Projects Agency), the DoD and the Navy.

In 1966, the Army contracted GE to build a working prototype of its quadruped design, which could be likened to today’s BigDog robot by Boston Dynamics except that it was “driven” by a human pilot and stood about 11 feet high. The “walking truck” was powered by a 90-horsepower, gasoline-fueled engine, weighed in at about 3,000 pounds and had four jointed legs in order to move around. The on-board operator would control the legs of the vehicle using pedals and hand controls; e.g., the driver’s right arm and leg would control the vehicle’s right front and rear legs, respectively. This imbued the machine’s movement with human dexterity and decision making, while leveraging its ruggedness and strength. The machine was able to lift a 500-pound load with one foot and rescue a jeep that was stuck in a mud hole. 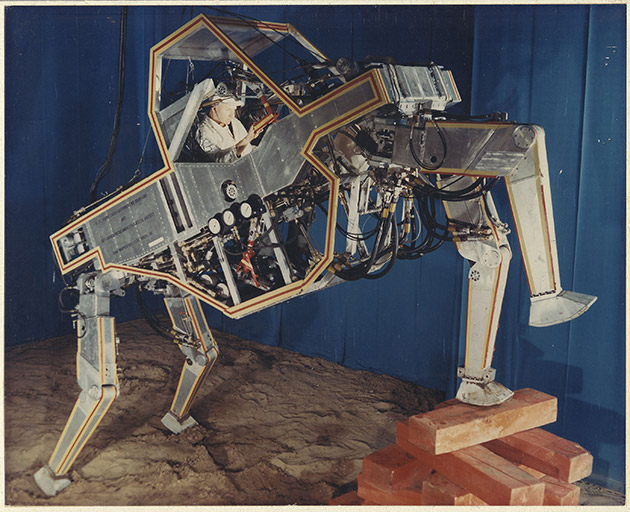 In 1965, Mosher and the GE team began work on a parallel project that also used CAM controls and was developed by both the Army and Navy. It was called the Hardiman I, and where the original Handyman project was controlled from a distance, this time the user would sit inside an exoskeleton framework. The goal was to directly augment the wearer’s lifting ability so that it could assist in remote and restricted areas where access to forklifts and other heavy-lifting equipment would be limited. The Hardiman I was built and tested in separate sections, beginning with a single arm and leg, before the entire exoskeleton was assembled. The single-arm tests were largely successful, enabling it to lift a 750-pound load. The leg tests were more problematic, with difficulties in perfecting the feedback mechanism and mobility. When fully assembled, the Hardiman I would stand six feet tall, weigh 1,500 pounds and use a combination of hydromechanical (hands) and electrohydraulic servos (arms and legs) for control and motion. After years of development, however, the government’s contract ran out before a fully successful model could be completed. 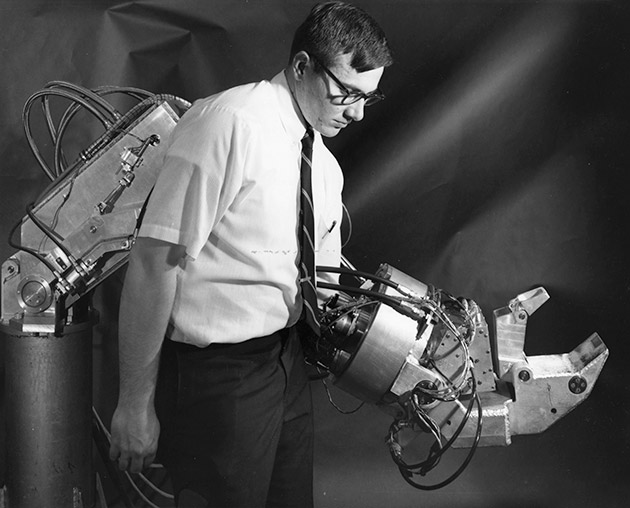 We may not have seen the GE Hardiman I come to fruition, and the quadruped vehicle never seemed to catch on, but Mosher’s work definitely made an impact on future researchers. Marc Raibert, founder of the robotics company Boston Dynamics, said, “The GE walking truck was one of those inspirational projects some of us remember from when we were kids, just getting interested in technology.” Although Raibert’s projects, like BigDog, are not built around human controls, there is some crossover with Mosher’s research at GE. “Ralph’s designs had captured the key ingredient of force feedback; in his machines, the forces were fed back to the human operator to give him or her a sense of the environmental interaction of the limbs under control. In our designs, force feedback is still important, but the control algorithms running on the computer [are] the target of the feedback: same principle with a different implementation.” The concept of massive, heavy-lifting exoskeletons seems to have fallen out of favor as well, in lieu of smaller supportive devices. Companies like Ekso Bionics have employed the technology as a rehabilitation tool and assistive device, while military developers, such as Lockheed Martin and its HULC exoskeleton, have opted to work on flexible field units for subtly amplifying load capacity and endurance. There doesn’t appear to be a single, unified path of development for man-amplifying and robotic technology; instead, researchers seem to be sampling from “a kind of technical stew,” as Raibert puts it.

[youtube http://www.youtube.com/watch?v=coNO9FpDb6E?wmode=opaque]
[Images courtesy of the Museum of Innovation and Science]